Scroll down for text 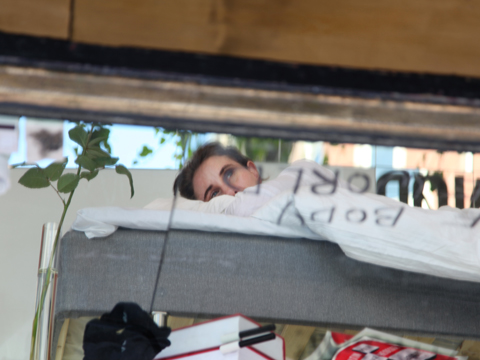 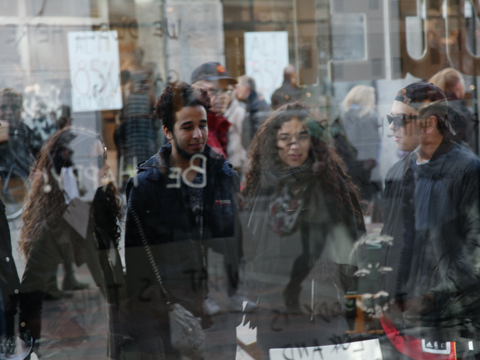 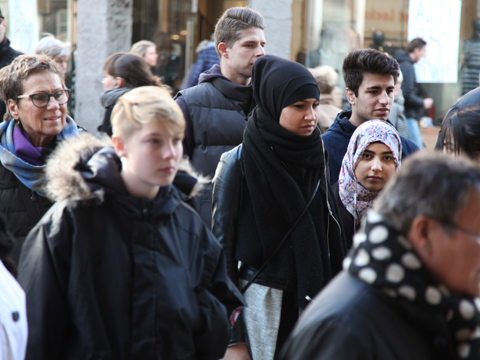 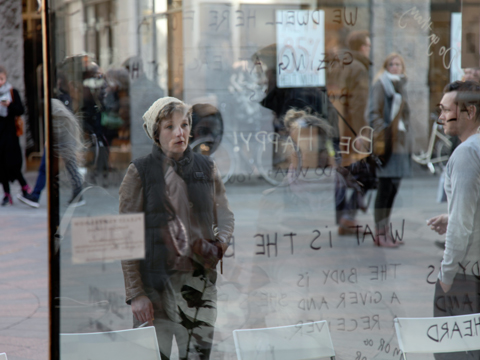 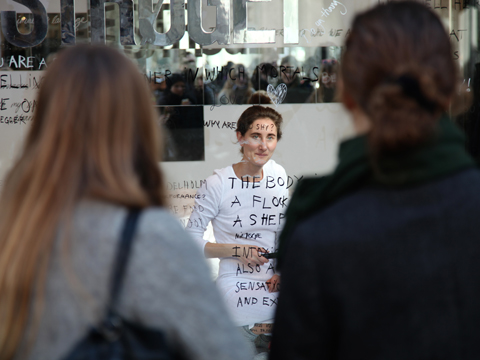 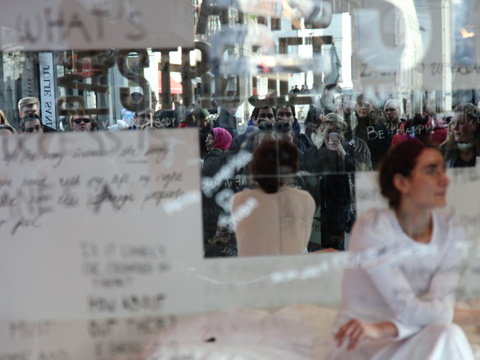 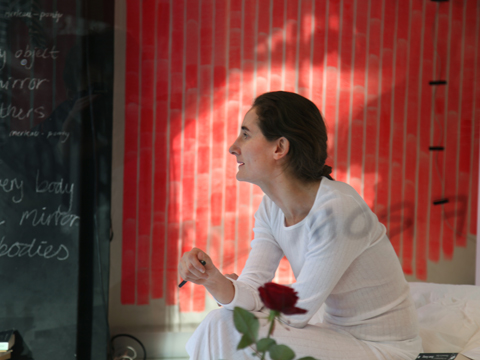 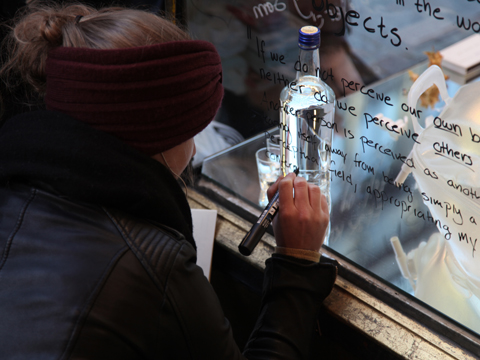 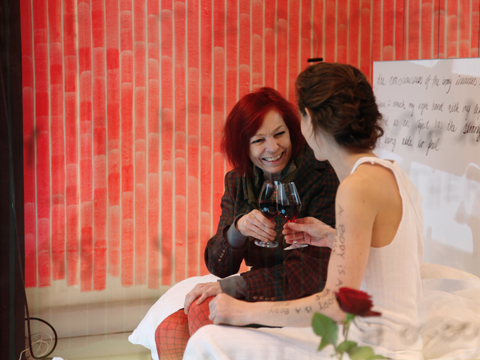 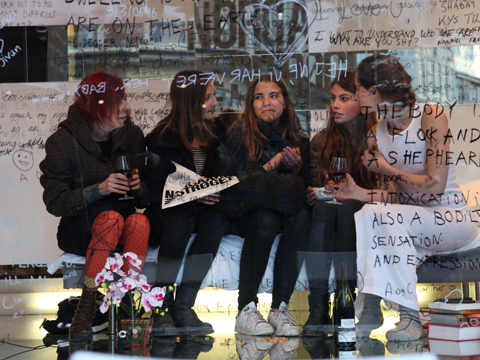 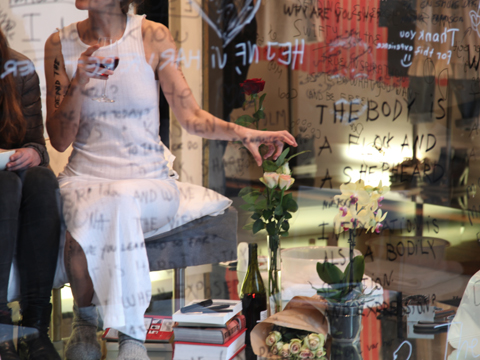 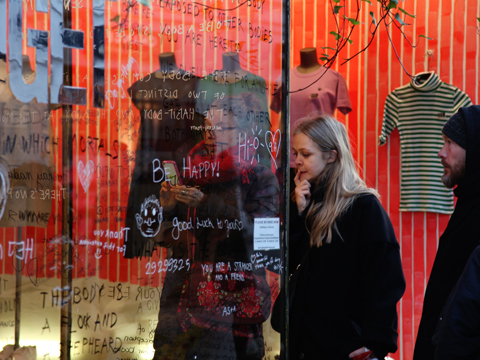 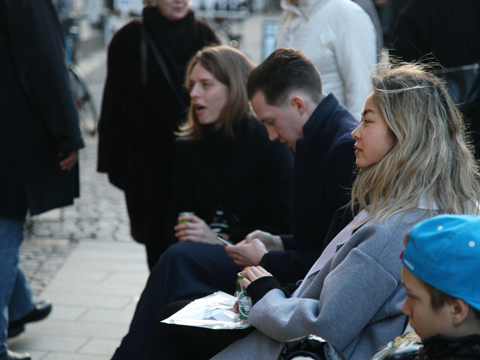 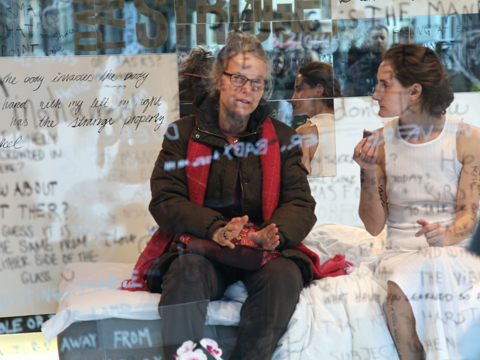 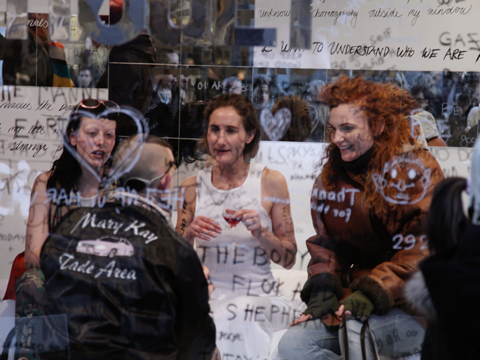 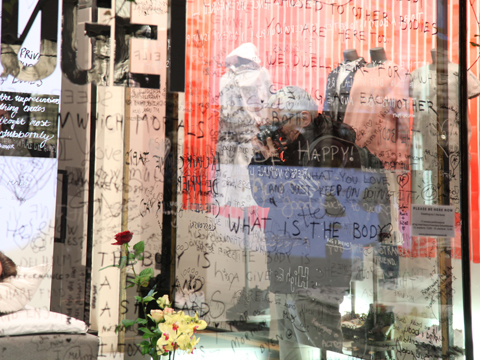 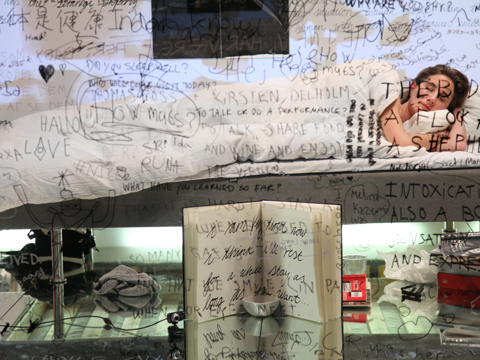 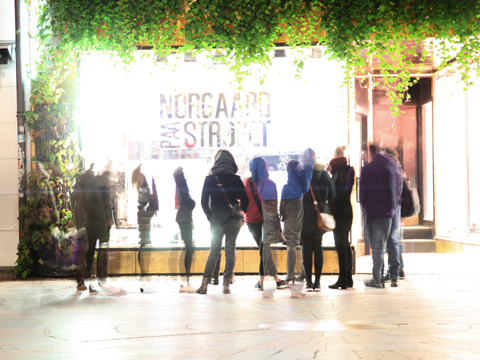 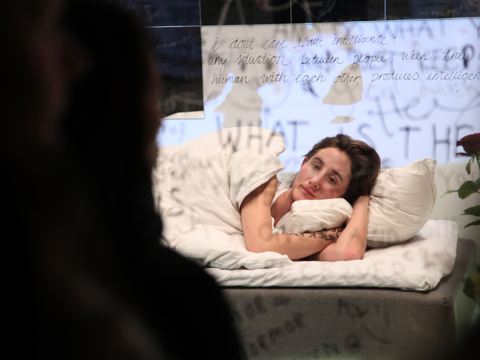 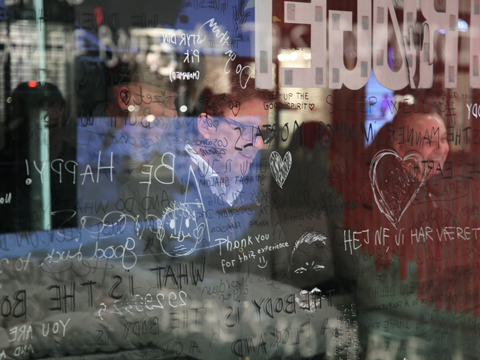 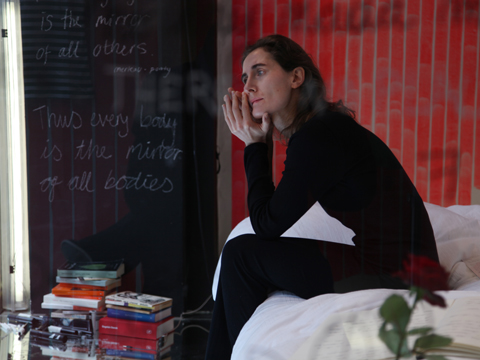 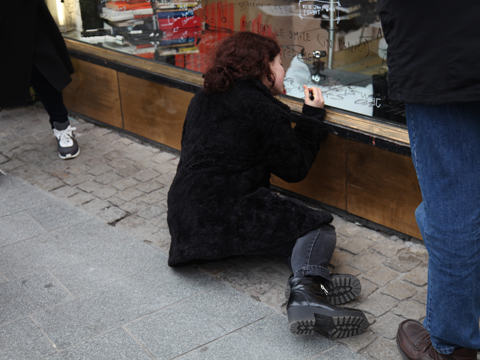 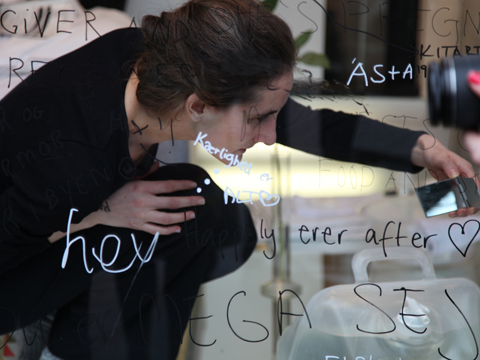 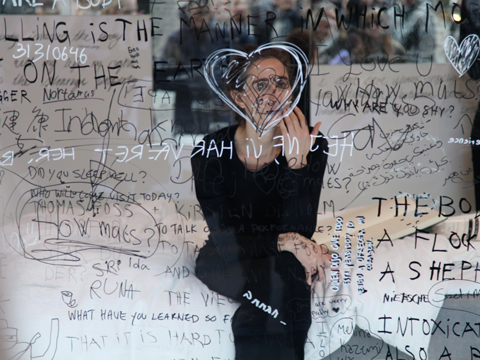 Written on my arm:
“Being here as a body is always one and the same as being there with you.”
(Heidegger)
BODY TYPE: (inspired by Susan Sontag)

So many different (types of) people (passing by this window). (I look into their eyes and see so many lives). The longer the eye-contact, the deeper we dive (into each other) – sensing the lives behind the gaze (on both sides).
(I see) mutable, movable, transformable shapes and sculptures in motion. Performing an unknowing choreography outside my window.
SHARING WINE
Soon, I’ll receive a guest.
Shy. Like me… Maybe that’s why we get so awkward with each other…?
She brought two orchids. One real, one fake. In my stupid self-centeredness I couldn’t help but wonder if I were the real or the fake…
And she opened my room to strangers and friends on the other side of the glass. Invited them in, broke down the boundaries and created life. Real life.
I don’t like orchids. They are real but they look like plastic. they pretend they’re made of plastic.
I prefer the real fake ones made of plastic. They don’t pretend to be anything but fake.
I prefer the genuinely fake to the artificially real In order to gain full control of the image, I had to remove my own body from it…
(Kirsten Delholm)
“My body is distinguishable from the table or the lamp in that I can turn away from the latter, whereas my body is always and constantly perceived. But in that case, is it still an object?”
(Merleau-Ponty)
I am exhausted. I’ve lost overview of the causes and effects that my being here is creating.
The strange thing about couples: That they always have to confirm their internal relation after eye contact with someone else.
First I have to look at them both. Then I can exchange eye contact with one. But then he or she must turn to look at their partner. To confirm their connection.
Is the reciprocal gaze really so dangerous?
Or are the relations between couples so fragile…?
ART IS A FORM OF CONSCIOUSNESS.
ART IS A ’SITUATION’.
THE SITUATION AWAYS PREVAILS.
(Susan Sontag)
I’m becoming accustomed to the situation – feeling more and more at home.
Becoming capable of receiving people in my space rather than being at the mercy of other peoples’ space.
This room is becoming charged. With life, significance, with layers of experience, encounters and exchanges.
It is getting a life of its own, taking everything and everyone along on its ride.
And I’m becoming as much a passenger as everybody else.
Questions and answers written on the glass:
“Is it lonely or crowded in there?”
“How about out there?”
“I guess it’s the same on both sides…”
Today I experienced great generosity and great humiliation.
A young man: When he understood, that I could do nothing, and that I cared, what he did, the situation escalated. When I stopped giving him my attention and my gaze, he started throwing himself against the window. Writing bullshit on it. And in the end pissing demonstratively on it right next to where I was sitting.
I co-created that situation. When? How?
Was it when I stopped him tagging on the window, asking him to write something intelligent?
Was it because I didn’t appreciate his contribution or his creativity?
Were they worthy of appreciation?
Not really…
They were only territorial markings, disrespecting my presence and my wish to meet him.
Transformed into an actual territorial marking in piss, as the events unfolded…
The absurdity of not being able to go to the toilet in public as part of this piece. But the piece can be pissed on in public…
I guess I had it coming…
You don’t just place yourself here without inviting all kinds of interactions. Maybe it would even be boring or meaningless if those parts of the spectrum weren’t represented. Not because I wish for them. But because they exist…
“There is no syntax for sensibility, hence it is ignored.” (Sontag)
SATURDAY
(Morning. Grey)
I washed myself timidly this morning. And shaved my legs.
Maybe today is different. People don’t stop so much – the weather changes their readiness to embrace curiosity. The cold shuts down the senses and the less important input is filtered off in a goal-seeking movement with the completion of this or that task as its end destination.
Many stations on the way are not visited…
Perhaps the thrill of the new has blown over – and in the end it was the spectacle of the situation rather than the piece itself, which was interesting…?
Maybe we can’t avoid our craving for sensation, for spectacular experience?
Maybe today will be the first subtle day in the history of this piece. That was how it was originally intended…
When fewer people stop to look, I must be wary not to catch their attention and their gaze too readily.
“The real dwelling plight lies in this, that mortals ever search anew for the nature of dwelling, that they must ever learn to dwell.”
(Heidegger)
Once again focusing on sinking into my space so I can meet and shape the world from here.
EYE RECORD
The body is a condensation of all the physical life that exists. It is a lighter condensation.
A liberation to think that I consist of elements that used to form part of other condensations, like an elephant, a star, or a snail.
To me this is the most direct channel to understanding my interconnectedness with everyone and everything.
Reincarnation exists as a process in this life, also on a cellular plane in that the body changes radically through life – both physically but also in terms of being and radiation.
(Madeleine Kate McGowan)
Haiku on demand:
I DWELL INSIDE GLASS
LOOKING AT HUMAN BEINGS
EXCHANGING GLANCES
Question and answer written on the glass:
”Don’t you get shy with all the people staring at you?”
“No, I’m staring at you too…”
info contents literature